About two years ago, before leaving the United states, I've posted the following "study" friends-only on facebook. However, I feel that it might fit the format of this blog, so I'm reposting it here.

Everyone knows that the US monetary system is kind of screwed up. I you think America runs on Dunkin' Donuts – bullshit, America runs on quarters. Living in the US is a constant chase after the 25¢ coins: you need them for everything, whether it's parking, candy machines, or laundry.

The screwed up thing is that the rest of coins (1¢, 5¢, and 10¢) are absolutely useless. It's no Europe, in a store the cashier won't ever ask to look for ten cents, since she or he knows you don't have those. Instead, every American possesses a huge can at home where the coins are accumulated (you can cash them in a special machine later, to make sure that the worthless cycle continues).

And I was not an exception. This Mexican coffee tin filled up exactly by the end of my 3-year stay. 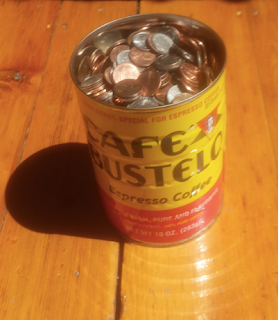 Recently, my old friend Valery Yundin was visiting and (after a couple of beers) we decided to estimate how much the coins were worth. Valery and I weighed the can (it was 3.5 kg) and looked up the mass of each coin on the Treasury Department website. Then we used two competing models to deduce the frequency with which 1¢, 5¢, and 10¢ occur:

(2) We actually measured the coin distribution for a small sample of ~10 coins and assumed it is the same in the bulk.

You might be like: "Gosh, are you particle physicists or what?** Who else would get a 2.9% discrepancy and call it 'accurate' ?" Now watch my hands. Valery visited exactly 1 month ago, and I kept accumulating coins after he left. One month is 1/35th of my total stay in the US.

What do kids say these days? "Science works, bitches?" I guess that must be it.

* Perhaps it's related to the way the prices are formed in the US – the xx.99¢ and xx.95¢ are too frequent, which biases the distribution. But I cannot prove that.

I'm an assistant professor at the Institute of Science and Technology Austria. My research focuses on theoretical atomic, molecular, and optical physics. I enjoy revealing and establishing connections between different fields, and therefore often find myself working at the interface with chemical and condensed matter physics.